Breast cancer is one of the most common types of cancer in women. Statistics show that one in eight women in the world will develop breast cancer at a certain time in their lives. Breast loss adversely affects patients physically, socially and spiritually. This type of organ loss reminds the patient about his / her trauma, disrupts his / her body perception and causes him / her to think that he / she is undesirable and disliked. 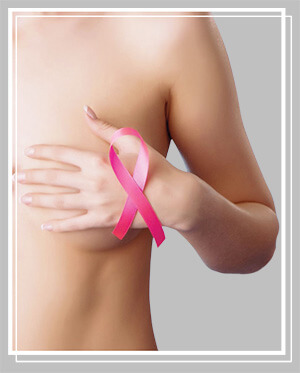 Increasing the quality of life of the patient after cancer treatment is becoming more and more important. Breast reconstruction after removal of the breast due to cancer or other disease is one of the most successful operations of plastic surgery and it is now possible to create a breast that is very similar to a natural breast. All breast cancer patients who do not have a medical obstacle to breast repair can and should be breast repaired. The General Surgeon, Oncologist, Plastic Surgeon and the patient decide together the timing, method and the procedure of breast repair. In early stage tumors, the repair process starts during the removal of the breast. If the stage of the tumor is advanced and postoperative radiotherapy is planned, repair is postponed until later. The patient is expected to terminate chemotherapy and radiotherapy, and often a year later the repair process begins. If it is unclear whether he will receive postoperative radiotherapy, an empty tissue expander is placed under the breast muscle during mastectomy and swelling is initiated after the end of treatments. In this way, the patient is saved from having an extra surgery.

The methods used for breast repair are:

Patients with small breasts, low sagging breasts, no skin loss, and no radiotherapy are suitable for prosthetic repairs. Silicone prostheses can be inserted directly in skin protective mastectomies where the entire breast skin is protected and in protective subcutaneous mastectomies where the nipple is protected. The prosthesis is placed under the breast muscle. If there is a skin loss during mastectomy, an empty silicone balloon called expand tissue expander is placed under the chest muscle. After approximately 3 weeks of surgery and the healing of the tissues is completed, this silicone balloon is inflated with saline injections. The inflating process takes 2-3 months. As the tissue expander swells, the breast skin on it gradually expands. Inflating process, usually continues until 50% of the targeted breast size is reached. The patient is then re-operated, the tissue expander is removed and a silicone prosthesis is replaced. In patients with severe skin loss after mastectomy, in cases where the skin quality in the chest wall is not good, in patients who have received radiotherapy, their tissues are preferred over silicone prosthesis. Patients who have given birth, have a belly, prepared from the abdomen, do not have enough tissue in the abdomen, unborns can be used in the core tissues carried from the back.

Fat injections in breast repair is a topic that has been on the agenda recently. Fat injection can be used alone in patients who do not have much skin loss and have a small breast. One time is usually not enough and may require several applications. In addition, other methods of fat injections are often used as a supportive procedure.

When all stages of breast repair are completed and it is assured that symmetry is provided, repair of the nipple and surrounding aerola tissue is performed.